The Crossroad between Africa and Asia

Blessed not only by nature but also by location, Mauritius provides an opportunity of fusion between the East and the West. 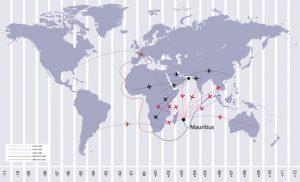 Mauritius is situated in the Indian Ocean, approximately 2,400 kilometers (1,500 miles)off the South East Coast of Africa. The Island has volcanic origin and covers an area of 1,865 square kilometers (720 square miles). Coral Reefs surround most of the coast, excluding the South Coast.

The average temperature during day time is 25°C (75°F) and during night time, the temperature rarely drops below 13°C (62°F). There are two seasons; it is hot from November to April and warm from May to October.

The Economic Pillars of Mauritius

The main economic pillars are: cane, technology, textile, tourism, financial services, and ICT/BPO. Healthcare and education are two emerging sectors. Mauritius is positioned as a place to launch your business activities into the rest of the African continent. This is due to its close proximity, numerous flight connections, strong banking system, and ease of business set up and maintenance. The average GDP growth for the last 10 years is 5%.

Mauritius has a democratic parliament and holds a general election every five years. Mauritius prides itself on its social stability in a multicultural and ethnic environment. It operates a legal system primarily based on English law.

Primary and Secondary education is compulsory and free in government schools. The general population literacy rate is at 90%. French and English are taught as primary languages at school. There is a strong parental commitment to education and an increasing awareness of the need for Tertiary education for skilling the younger generation of Mauritians in the requirements of the modern world. Recently the number of mainland African students attending tertiary education in Mauritius has increased substantially, solidifying the view of Mauritius as a respected model of education within Africa.

Personal, corporate, and value added tax is set at a flat rate of 15%. Dividends are tax free and there is no capital gains tax. In addition, there is no exchange control.

Port-Louis naturally grew to be the economic and administrative capital of Mauritius after it superseded Mahebourg in the early eighteenth century because of the superior quality of its harbor.

Curepipe stand at the lower tip of the urban zone, which stretches diagonally across the island from Port-Louis through Beau-Bassin, Rose-Hill, Quatre-Bornes, Vacoas, and Phoenix. The strangeness of the name "Curepipe" has given rise to fanciful etymologies; the most persistent of which is that travelers used to stop there to "cure" their pipes. Curepipe today is an elegant residential town with prize colonial houses, pleasant public gardens, and an ultra-modern vegetable market!

Grand Baie owes its popularity to the enchanting quality of its emerald waters and to its liveliness by day or by night. It offers facilities for safe swimming, sailing, windsurfing, and waterskiing. Grand Baie also hosts a variety of fashion and craft shops, hotels, restaurants, and night-clubs.

Mahebourg is named after one of the foremost figures in the history of the island, the French governor, Mahe de Labourdonnais. A visit to the Naval museum in Mahebourg reveals the richness of the historical past of the village. 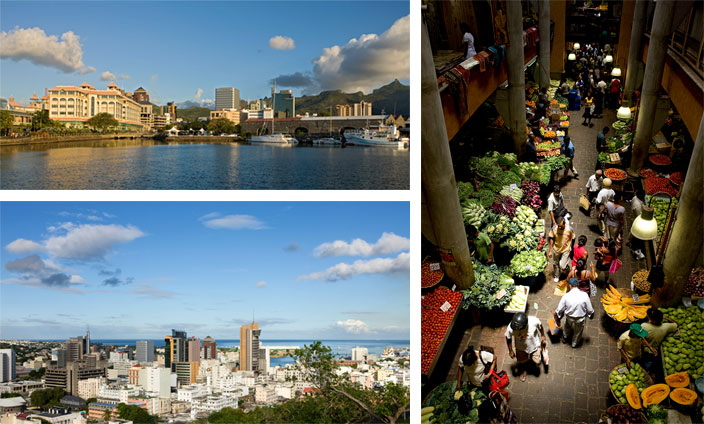 Mauritius is a densely populated island of approximately 1.3 million people. It has a reputation for stability and racial harmony among its mixed population. Mauritius is known as a plural society where ethnic groups of all kinds are present. Hindus, Muslims, Creoles, Chinese and Europeans live in peace and harmony. This makes the island a very unique place in this world, with Mauritians growing a reputation of tolerance and kindness towards all people.

Most Mauritians are bilingual, being equally fluent in French and English. English is the official language, but French and Creole are widely spoken. Oriental languages also form part of Mauritius' linguistic mosaic.

The Mauritian unit of currency is the Rupee (Rs). Each Rupee is divided into 100 cents.

Mauritius has international direct dialing facilities to most parts of the world, as well as high speed fax and internet services. 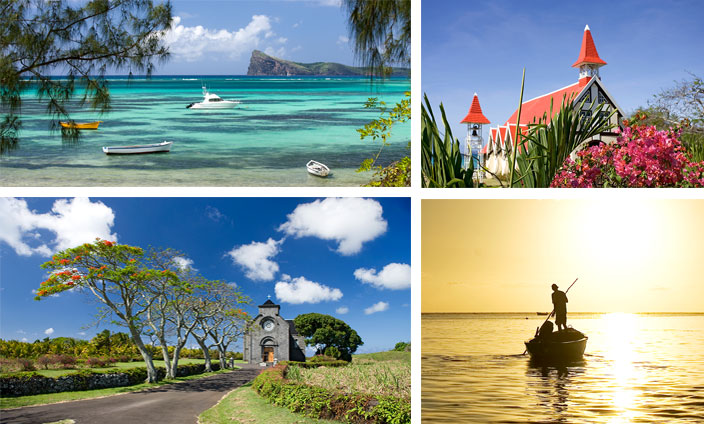